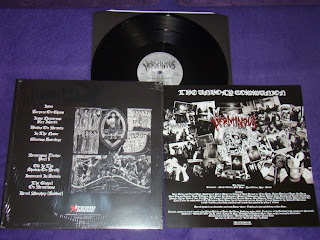 VERMINOUS - The Unholy Communion (XTREEM Music - LP 2013)
Long time I had to wait for new Verminous album, I almost started to doubt it will ever be released. About ten years ago they truly crushed me with their debut LP “Impious Sacrilege”, but that was time, when old styled death metal bands in Sweden were only very few, so releasing such album was something more than special and exciting – it was unique. And bands like Verminous, Kaamos, Necrovation and obviously also the masters from Repugnant really caused some serious damage to my hearing. Nowadays the times are different and every week brings another band and another old school death metal release, so it becomes slightly dull and it is sometimes hard to get so passionate and enthusiastic about everything what labels have to offer. With Verminous it is different – I really wanted to hear them, as I am a big fan of their past recordings. I still remember getting the debut album for review in my old fanzine and how this morbid, obscure and evil death metal infected me. To this day “Impious Sacrilege” LP and “Smell the Birth of Death” 7”EP are some of the most killer releases of the decade (check my old reviews of these two recordings!). And now ten years later Verminous releases “The Unholy Communion” and well… I may be spoiled with the great number of killer old school death metal nowadays, but still not too many can match the quality of “Impious Sacrilege”. “The Unholy Communion” certainly does that and what’s more I think that these ten years of break had quite good influence on Verminous, as they come back with their most vicious, violent, morbid and best written material so far. Yeah, definitely after listening to “The Unholy Communion” I can say that this is Verminous’ best effort so far and for sure one of my candidates for the album of the year. So bloody good it is!
The songwriting on “The Unholy Communion” is just perfect. I love those riffs, those excellent arrangements, the feeling and the atmosphere, which Verminous created in their music, killer harsh vocals and finally also the catchiness of their death metal – because it may be violent and aggressive, but every song has some truly memorable parts, killer old school choruses, riffs, which will cut your throat and rip your guts out… simply, Verminous plays some perfect death metal in the old school way here. Fdjhfkhfk jdfksdlsdld   jdsajds  sjdasjdoisa sjado... sorry, I start mumbling, but head banging and writing at the same time is not an easy thing to do. I’ll better stop writing then and finishing listening to the album and once I do that I’ll write some more words about it!
“Glorious Sacrilege”!!!!!!!!!!!
I am back! These unholy gospels of Verminous are really excellent and they are so infectious that it is just impossible to resist to those riffs and awesome songs. You just must band your head, throw a clenched fist into the skies and scream the lyrics along with Germaniac. I know someone may think that I am exaggerating, but really I feel like this album is perfect. It is just a good listening, such a huge dose of lethal energy and powerful music that if it was bulldozer then for sure I was already dead, lying massacred in some ruins. Every song on “The Unholy Communion” sounds awesome and delivers new portion of nailing riffs and from start finish this is straight forward, thrashing, utterly satanic metal of death and damn, I truly recommend you this album. Recently bands like Degial, Invidious, Morbus Chron, Main, Vanhelgd, Chapel of Disease and other were desecrating mercilessly and slaying the maniacs. In my opinion they all did just excellent job. Verminous belongs to the best bands around and for sure “The Unholy Communion” is an album, which has all ingredients necessary for the timeless classics. It already is better than many albums released in the early 90’s, at least in my opinion.
Standout tracks: “Hordes of Vermin”, “Glorious Sacrilege”, “In the Name” and all
Final rate: 99/100
Posted by Astus at 09:53