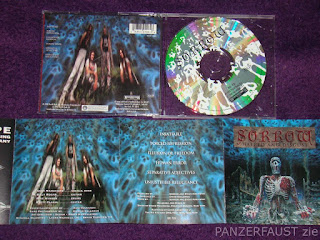 SORROW - Hatred and Disgust (ROADRUNNER Records CD 1992)
In case you have never heard about Sorrow before, let me say that this band was formed back in 1988 under the name Apparition. As Apparition they recorded a couple of demo tapes (including "Human Fear" demo) and one single "Eternally Forgotten / Curse the Sunrise" in 1990 (for Relapse Records), after which they changed the moniker for Sorrow. Sorrow was shortly lived entity unfortunately and split up already in 1993 - luckily there's no sign of potential reunion, which is a curse among so many old bands nowadays. What Sorrow left behind was "Forgotten Sunrise" EP and "Hatred and Disgust" album. The latter, released in 1992 by Roadrunner Records, seems like slightly forgotten album, don't you think? It would seem that Sorrow had everything within their reach to become popular and big death metal band. They started to record at the highlight of death metal popularity ad got signed to the label, which was also home to some of the biggest names in history - such as Obituary, Death, Deicide, Gorguts, Malevolent Creation and so on. But when you give one listen to either "Forgotten Sunrise" or "Hatred and Disgust" you could quickly hear why Sorrow never has reached the status of these other bands that I just mentioned. Their music wasn't just quite as good as some other records of that time. I'm not saying it was terrible or unlistenable, but it just wasn't the best quality death metal of the old era. Still, it's good and worthy enough to have both CDs in your collection, it's worthy to give them spontaneous and occasional listen once every few years... and it's always cool to save it from being forgotten.
When compared to "Forgotten Sunrise", Sorrow added a second guitarist to their line up. But I cannot say that this more complete line up had any strong impact on how the music sounds. It still is quite simplistic, not overly technical death metal, with a strong doomy vibe, which dominates throughout every song. In many ways I see "Hatred and Disgust" as less impressive and quite slowed down, lazy version of "Leprosy". But not only it lacks the genius of Death riffage or impressive leads, but also the powerful and crushing production, which would help the songs to have massive influence on the listener.
I like quite few of these riffs, I don't even mind that slow pace, which Sorrow seems to be most fond of. Faster section appear in every song, sometimes can even be dominating (like in "Forced Repression") but generally I like how diversity between the tempo changes and riff style has been done here. And songs like "Separative Adjectives" really do sound great and let me think that there was a lot of potential in Sorrow. But the band was dead soon after the album saw the light of the day…
Standout tracks: "Forced Repression", "Separative Adjectives"
Verdict: 70/100
Posted by Astus at 17:16 No comments: 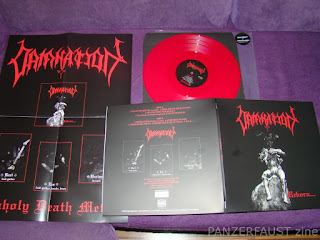 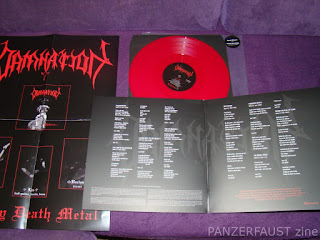 DAMNATION - Reborn... (WITCHING HOUR Productions - LP 2015)
I think that "Reborn..." is one of my favourite and one of the best and most important Polish death metal albums from the early / mid 90's. Damnation generally were a fantastic band and I always considered them as one of the best acts from the Polish death metal underground, even though they may seem slightly forgotten and underrated. Their music sounded a bit different and wasn't that easy to get into, but that never spoiled the great experience when listening to them.
The album begins with a real fuckin tornado that blows everything with enormous strength. This is "Pagan Prayer", one of the songs, which originally appeared on the second demo "Forbidden Spaces", but Damnation re-recorded them for the debut album. This song is a killer, so damn fast, brutal and sick. With this song, or the second track "The Land of Degradation", you could hear that Damnation had their own style of death metal, with these vicious, brutal riffs, dark, evil aura, the way songs were arranged and even Les' vocals were quite unique. Everything has quite rough and obscure, diabolic feel, and definitely it is not death metal, which you could get into easily. Surprisingly though, you will be able to catch up some more memorable riffs (in the mentioned "Pagan Prayer" for instance), so that definitely will help adopt to the savagery of Damnation music. I like the powerful kick this music gives, I also like that it balances the fast paced, blasting death metal with slower, more heavy stuff. And then such "Maldoror Is Dead" can bring you a very strong reminiscence to Immolation's "Dawn of Possession" LP. So, this band could be one of the most noticeable influences for Damnation, along with the likes of Deicide maybe, but "Reborn..." has enough guts to be considered as a unique and characteristic record. Sometimes it may sound a bit weird, especially in "The Rulling Truth", but you can get used to it. All in all, "Reborn..." is a great record and I am fully happy with its well deserved vinyl edition, which Witching Hour putted out back in 2015.
Standout tracks: "Pagan Prayer", "Time of Prophets", "Maldoror Is Dead"
Verdict: 85/100
Posted by Astus at 17:03 No comments: 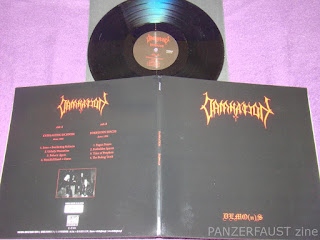 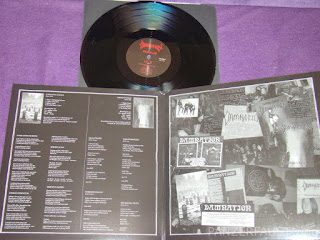 DAMNATION - Demo(n)s (WITCHING HOUR Productions LP 2015)
Back in 2015 Witching Hour Productions brought us the reissues of all early Damnation recordings and I have to say that it was a great idea to exhume these demos and albums. I especially loved the idea to see them all on vinyl, since I already had the original CDs. I treated myself with all four vinyl releases and here I want to write few words about "Demo(n)s". This is a compilation of two Damnation demos: "Everlasting Sickness" and "Forbidden Spaces", so the very beginnings of this band.
Starting with "Everlasting Sickness" from 1993... You could hear that it differs quite much from what Damnation is mostly known for - which is chaotic, fast and very dark, evil sounding death metal. This demo is more archaic and rougher, much less technical and advanced in all these aspects, even when compared to Damnation's second demo. And it's not something what I would particularly like, to be honest, these songs do not impress with anything spectacular... Sure, it is a solid and worthy demo, especially when compared to other Polish death metal demos from that time… But to me this demo has no chance with the future Damnation.
On the other hand, "Forbidden Spaces" blows the whole "Everlasting Sickness" in seconds, they made a huge step forward with this second demo. This is what Damnation is known for - fast, vicious, savage and utterly aggressive, quite technical, but straight forward death metal with a chaotic feel, due to quite unusual song structures, arrangements, even the way riffs were composed. But this is powerful stuff and really fuckin possessed and evil. In "The Ruling Truth" the music is slower, almost kind of atmospheric, yet still vicious as hell, but most of this material is just a beast. Varien's drumming is fantastic, I also like Les' vocals a lot. Generally, you have to admit that Damnation had their own, unique and recognizable style of death metal – and it really started here, with “Forbidden Spaces” demo. Give a listen to such songs as "Pagan Prayer" and admit that! But the whole demo is mighty and crushing, so I'm very glad to have it on faakkkinnn vinyl! It definitely belongs to the best Polish death metal demos of all time.
Vinyl presentation isn’t the most impressive or interesting, especially the black front is simply dull… but at least we could find some lyrics and old photographs inside the gatefold.
Standout tracks: "Pagan Prayer", "The Ruling Truth"
Verdict: 75/100
Posted by Astus at 16:51 No comments: