Entrails - Tales From the Morgue 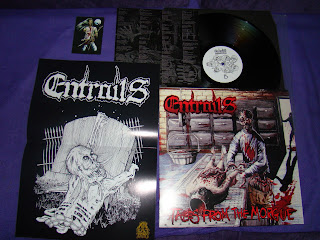 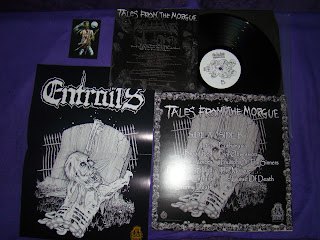 It cannot be a mistake. If I see an album with statement in the booklet such as "in the shape of Entrails, this pure old school Swedish death metal will tear your soul apart", then it means I have to check it out, because more likely it's going to crush also my skull. And "Tales From the Morgue" fuckin did it perfectly. Whether you like such playing or not, one thing is certain – here’s another quality death metal band from Sweden and the fans of this scene will definitely have to check this LP out. Besides, just take a look at that cheesy front cover – an autopsy made by a zombie? It’s almost as tasteless as the cover of Centinex’s “Subconscious Lobotomy”, but the maniacs of horror gore splatter movies will definitely love it hehe! Anyway, Entrails is not so newcoming band, as some of you might think. OK, their name is pretty much new to the scene, but they’ve been existing already back in the glorious days of the early 90’s and supposedly almost entire material from "Tales From the Morgue" has been written back then, only now it has been exhumed and refreshed (read: rearranged, reworked and re-recorded). So, that’s yet another reason why I was sure that Entrails will really tear my soul apart.
The albums starts with an intro, which might have easily been taken from some old gore horror movies, like "Helloween" or "Friday the 13", it's got absolutely similar, creepy atmosphere. And then the first riffs start and from the opening second I've been possessed by Entrails. This is yet another fantastic piece of traditional Swedish death metal. I know that some of you may vomit already when hearing this, but I don't give a flying fuck about it. I've been a fan for 20 years and still haven't got enough of that kind of playing and definitely Entrails belongs to the best bands, which resurrect that death metal slaughter. Just listen to their sound; it's simply classic, and with that buzzy guitars and roaring growlings it brings only the legendary albums to my mind and I want to scream in joy. I may not like the drums sound in 100%, but that’s just a detail, which definitely doesn’t disturb me massacring the Entrails! Honestly, there’s not even a second on “Tales From the Morgue”, which I wouldn’t enjoy. This is excellent, very constant LP, but of course I’ve got some favourite songs. They’re: "Blood Red" with that great Dismember-esque riffing, "Voices", which reminds me Evocation a lot, then "Entrails"… And "Euthanasia", which is an epic in my opinion, with fantastic opening theme. "The Curse of Death" also starts with amazing, epic melody and then it smoothly switches into real headbanger, similar to some of the Bloodbath riffing... And I love also that slow part in the middle of that song, with the sample from "The Exorcist" movie. That sounds just fuckin amazing. And finally there's "The Morgue", which probably is the fastest and most aggressive song from the entire album. But as I already said, there's no single part of "Tales From the Morgue", which I wouldn't enjoy. The whole album is perfectly written and arranged, equally catchy and brutal, melodic and furious, just as I like it.
Any complains? No, I don’t think so. I’m not going to say that Entrails rips off the old riffs – I would never accuse them for doing that – but "Tales From the Morgue" sounds like someone have picked up all the best parts from my favourite Swedish albums and glued them together. But as I said, they do so without any plagiarism, I guess it’s just more of a tribute – which I remind you also, was mostly written 20 years ago, so can there any more original death metal than this one?! To conclude then, "Tales From the Morgue" is just excellent LP (how many times do I have to repeat that?) and if you haven’t checked it yet, do so immediately, otherwise you will end up on that autopsy table from the front cover, cut and eaten by some gruesome living dead.
Standout tracks: "Blood Red", Voices", "Entrails", "Euthanasia", "The Curse of Death", “The Morgue”
Final rate: 90 / 100 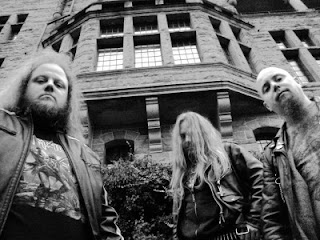