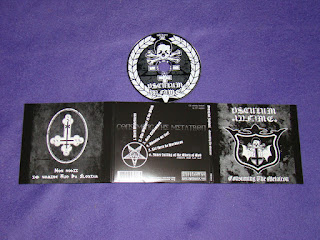 I have a feeling like I travelled back in time, and it is something like 12-13 years ago. Back then I was trading tapes and CDRs with some metal comrades and one of them – I don’t remember who, I think it was Tom from Throneum – recorded for me few French black metal bands. Among them there were such acts like Diamond Eyed Princess (shitty moniker, but really good music!!!!), Noctis, Crystalium and Osculum Infame. I don’t really remember which material of Osculum Infame did I get back then and did I like it or not, as it was long time ago and I don’t even remember a single note of the music, but the name somehow stack in my mind. And when I saw that Battlesk'rs Productions releases the new material of Osculum Infame I was like “fuck, I remember them! They still exist??”!! Hehe, now seeing that this French horde released several recordings during the past 15 years it may sound slightly funny, but from the other hand there was a ten years long break in the 2000’s, when Osculum Infame seemed to be on a hiatus, and their last full length album (“Dor-Nu-Fauglith”) was unleashed back in 1997! Anyway, now the band is back in form, in 2010 Osculum Infame unleashed EP titled “Quwm” and a compilation CD and now it’s time for another new release, titled “Consuming the Metatron”. This is limited to 777 copies digipack featuring new and unreleased material, one track from 2011 called “Inner Falling for the Glory of God” and five tracks coming from their last recording session and from an unreleased album recorded early in 1999 under the title “The Serpent of the Ages”. All in all there are six tracks closed in about 30 minutes.
Well, I must say that I completely didn’t know what to expect from Osculum Infame, except that it must have been black metal, so I do must admit that I really, really like “Consuming the Metatron” and it actually turned out to be much better than I expected. I don’t know why, but I kind of thought it will rather be simple, raw and obscure primitive black metal, but no way you can say something like that about Osculum Infame. OK, the music is utterly morbid and obscure, hateful and dark. Speaking of the atmosphere this is classic black metal release and I do must admit that the French band managed to capture what I call the essence of black metal in excellent way. The mood of their music is just blood freezing and totally involving. But above all I must admit that the quality of the material from “Consuming the Metatron” is just beyond my expectations. I mean this probably may be one of the best black metal releases, which I have listened to this year. From the first listen I got drowned by this music and its atmosphere and I must admit that I really, really like it. Osculum Infame plays very much Scandinavian influenced black metal, you may be able to pick up several names to compare this French horde with, but it doesn’t really matter, I don’t think of it, but rather focus on the excellent music.
The riffing is just killer here. I did mention that Osculum Infame sounds quite Scandinavian, but they don’t just sound like one band and almost every song here is different to the previous one. Just listen to the beginning of this CD - “Dark Wickedness” is just classic black metal, at few times resembling for instance the recent Gorgoroth, Marduk, Ondskapt  and Ofermod albums, speaking of the vocals and the dark atmosphere. Then there is “The Whisper of the Witch”, which is more atmospheric, melodic and harmonious, especially in this beginning, where you can even hear some cello and quite happy, folky melody, but don’t think this is sugary shit, as the tempos are fast and uncompromising all the time through the song. Finally the third act, “Kein Entkommen”, can give you thrills with its relentlessness and straight forward attitude, as well as simple riffing, more in the old black metal traditions.
And so every song seems to be different to the previous one, but I’m not gonna describe every piece of “Consuming the Metatron” separately, listen to it yourself and discover it. It is enough that each of them has something different to offer and as the whole this MCD is as varied as black metal can only be, but within the limitations of this genre. I mean the whole basis of this music is classic BM, but there are so many extras within every track that it makes it totally involving and interesting. Like in “Kein Entkommen”, which I just mentioned, I mean this song starts with almost punkish simplicity, with the riffing, which can combine some Darkthrone, Gorgoroth and Taake, but its mid part is something totally different, it is very doomy, very melancholic, with sort of church like organs, sirens wailing in the back and almost agonising vocals, so the atmosphere is very, very gloom here. Not to mention all those things, which happen in “The Whisper of the Witch”, which as far as I can admit is the best song from the entire MCD.
A special attention must be given to “Inner Falling for the Glory of God”, a song from the upcoming second album of Osculum Infame, “The Act of Blood”. Well, let me just say that if the whole album will be like this song and as diversified and well composed / played as the whole “Consuming the Metatron” then it will be a must to obtain. Can’t wait!
Standout tracks: “The Whisper of the Witch”, “Absolute Me Not!”, “Inner Falling for the Glory of God”
Final rate: 90/100
Posted by Astus at 11:47