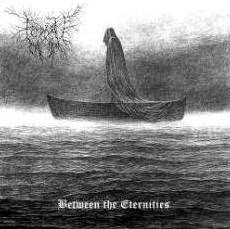 FORDARV - Between the Eternities (NIGREDO - CD 2014)
Not so long ago I had a chance to listen to Fördärv’s debut MCD “The Echo of Melancholy”, which was really awesome piece of traditional, maybe slightly sorrowful but harsh, black metal. Few weeks pass by and Nigredo Records has sent me another recording of Fördärv, which now is their debut full length CD titled “Between the Eternities”. I didn’t need a special invitation, I just wanted to listen to it right away, as the debut was really cool and it is just rare, when a black metal band can really catch my interest nowadays. And “The Echo of Melancholy” surely did. Now I have “Between the Eternities” in my stereo and certainly with this album Fördärv again nailed me to the ground and proved that the classic recipes of Scandinavian black metal are still alive and are possible to be played with passion and sincerity comparable to the old bands and days.
Already the front artwork for “Between the Eternities” reminds me some classic – in this case Norwegian – black metal covers; a lovely pencil artwork by the Polish master of art Zdzisław Beksiński is just amazing and looks perfectly good on the front of this album. And do you remember the black / white pencil artworks on early Burzum or Satyricon albums? This one fits them so well! I really mean that! As for the music, don’t expect anything new and unconventional from Fördärv, because as I already mentioned, this is more or less, but a classic, traditional take on Scandinavian black metal (with huge accent on the Norwegian cults). Mainly there is a great influence from Darkthrone, but also from such acts like Burzum, Satyricon, Immortal, Troll’s “Trollstorm over Nidingjuv” and so on and on… many to mention, I suppose. And then there are also newer bands, like Armagedda or Pest, which may have been also close to recapture the essence, style and sound of the norsk BM cult and which sound close to Fördärv. And now here is 2014’s “Between the Eternities” and well… it’s been 20 or more years since the Norwegian black metal scene has exploded, when the northern sky was ablaze, but there are still bands, which are capable of writing interesting, traditional tunes. And for me Fördärv with their “Between the Eternities” also belongs to that group. Who cares, if it is nothing original or that some of these patterns have been played numerous times before… If the music is good, then it is good, nothing more matters.
And trust me, there are several killer moments on “Between the Eternities”! Take for example the opening track “Legions of Death”… harsh vocals, almost kind of hypnotizing, mostly fast riffing, which carefully builds the cold, grim atmosphere… definitely it will remind you not just Darkthrone, but bands like Swedish Pest with “In Total Contempt” LP. But I enjoyed “Taedium Vitae” song even more, as I worship that kind of slower, darker, mesmerizing, sometimes kind of melancholic, atmospheric playing in it… More so, this lengthy track has some truly killer riffs, so all in all, this surely is one of the best moments on the album. And then “As Life Turns Black...” catches my attention, as it has a killer opening theme, which will resemble you both Bathory and Immortal. And maybe it is pity the band didn’t go even deeper into such epic territory, but I like that song a lot anyway. Yes, Fördärv music is simple, is unoriginal and maybe will say that it is nothing impressive… but who would give a damn? I don’t. In my opinion “Between the Eternities” is a perfect offer for the worshipers of the classic Scandinavian black metal. And that’s all you should know now. Support the band, support the label… get “Between the Eternities”!
Standout tracks: ”Legions of Death”, “Taedium Vitae”, “As Life Turns Black”