Nahum - And the Chaos Has Begun 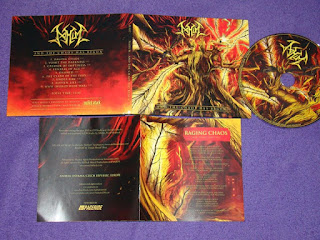 NAHUM - And the Chaos Has Begun (Self financed CD 2015)
Sadly it’s not often when I get some music from Czech Republic, but usually when I do then it turns out it’s some great music. Here’s one band that I didn’t know before, but whose music really impressed me. They’re called Nahum. Their debut CD was titled “The Gates Are Open” and released in 2013, but here’s a new material called “And the Chaos Has Begun”. And well, I must say that I am very pleased with what I’ve heard on this CD. First of all, the whole album is packed in nice digipak and the music got very good production, which fits here perfectly. Secondly Nahum composed some great songs and their blend of death and thrash metal is truly exiting and worthy.
“And the Chaos Has Begun” has a small Swedish flavour that many of you will surely like. What stands out on this album are not only some truly great riffs, but also the energy and intensity of the music. Even if Nahum has tendency to play some melodic riffs or leads and quite often they also slow down, the music is still aggressive and heavy. And when they do speed up, then it’s just absolutely crushing, fantastic stuff. Especially towards the end the album gets more harmonious and slow, so this is why I enjoy mostly the opening songs like excellent “Raging Chaos” (check the video for this one!) or “Vomit the Darkness” and “Creator of Emptiness”, which both have that great, aggressive thrashing feeling that reminds me one old band from Portugal called Sacred Sin (at least in few parts it does). I am actually also glad that the album is like 30 minutes long only. It’s like a perfect length for such music, in my opinion, as it doesn’t gets boring or repetitive so much.
So… I have nothing more to add, really. Nahum released very good album, “and the Chaos Has Begun” surely deserve your interest, especially if you’re into bands like Arch Enemy, Pestilence, Death, Kreator (latest albums), Sacred Sin and so on. Nice!
Standout tracks: “Raging Chaos”, “Vomit the Darkness”